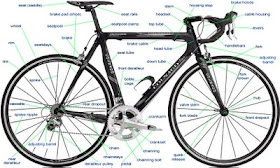 Bottom Bracket - The assembly between the pedals that allows the Crankset to rotate.

Brake Calipers & Brake Pads - The rubber/steel mechanism which rubs against the rim or brake discs to slow/stop the bicycle.

Brake Levers - Hand levers that allow the rider to use the brakes.

Cables - Attached to the Brake Levers and Gear Levers and the front and rear gear Derailleurs / Brake Calipers, for controlling the speed of the bike and stopping it.

Chain - A loop of links that connect the front gears and rear gears.

Chain Stay - Part of the bicycle frame that runs alongside the chain. 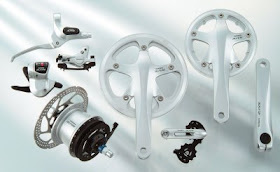 Crankset - Includes the crank arms attached to the pedals, one to three front gears (chainrings) and a ball bearing assembly that rotates around the bottom bracket.

Derailleur (Front and Rear) - The contraption that controls the front and rear speed settings, responsible for moving the chain from one gear to another. Comes from the French word to mean 'derailer'.

Down Tube - The lower half of the forward frame.

Dropouts (Front and Rear) - Fittings that attach to the wheels with nuts and bolts, so the wheels don't fall off.

Fork - A detachable part of the bicycle frame which holds the front wheel, with two dropouts.

Frame - The structural frame which holds the bicycle together.

Frame Set - The frame plus the fork.

Freehub - A hub and freewheel (see below) that are attached as a single unit.

Freewheel - The set of rear gears.

Gear Levers - For controlling the front and rear Derailleurs, for changing a bicycle's speed for going up hills.

Handlebars - For steering the bicycle.

Headset - The ball bearing assembly which attached to the fork and the handlebars and rotates inside the head tube.

Head Tube - The front part of the bike which contains the headset and fork.

Hub - The center of the wheel, to which the axle and spokes are attached to. 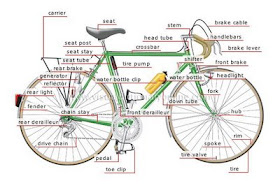 Pedals - For pushing down with your feet.

Rim - The steel part of the bicycle wheel which holds the tire.

Seat or Saddle - For supporting your buttocks.

Seat Post - The (metal) pillar which attaches to the seat, goes inside the Seat Tube and can be raised and lowered to adjust to the rider's height.

Seat Stay - Two poles that attach from the top of the Seat Tube to the Chain Stays near the rear wheel.

Seat Tube - The (vertical) tube directly beneath the seat, which contains the Seat Post.

Shift Lever - The levers which control the brake derailleurs, for shifting gears.

Spokes - Tensioned wires which join the wheel hub to the wheel's rim. Usually there is 28 spokes, but they also come in 32 or 36 spoke varieties (but are harder to find).

Spoke Nipples - The bits which attach the Spokes to the Rim. 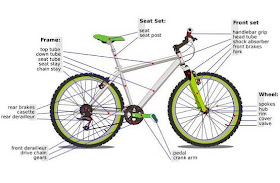 Stem - Part of the Handlebar set which attaches to the Head Set inside the Head Tube.

Tires - Those rubber bouncey things that fit over the wheel rims to give you a smooth ride. Keep them inflated, but don't overdo it.

Top Tube (or Crossbar) - The upper part of the Frame that extends between the rider's legs, between the Seat Tube and Head Tube.

Valve & Valve Stem - For putting air in the tires.

Wheels - Those wonderful round things, including the hub, spokes, rim, tire, tube, that make your bicycle roll.
Share